Monday September 5th, 360 Films confirmed that the studio is now in post-production on the feature family film “Crescent Gang.” This announcement comes exactly two (2) month after the production company announced winning  Audience Choice for its previous feature film “The Higher Spirit.” This announcement gives fans even more news to be excited about as two of the core production partners of “The Higher Spirit” remain together for this feature film.

We had so much fun working together on The Higher Spirit.  Just after the premiere, we had a follow up meeting and, by the end of that meeting, we all knew a Family Film would be our next project. – Onyx Keesha

The Dramedy, written by B. Danielle Watkins, is described as a high-stakes scavenger hunt set in Las Vegas and the surrounding Red Rock National Park where seven (7) children search for clues to find the one person who could potentially save the only family and home that they have.  360 Films’ Studio Exec. Mario Payne said in an interview, “Going into this project, we had a lot of confidence as we had recently developed another script that had similar elements.  That said, “Crescent Gang” is heavy with nuanced, emotional performances so we knew we would have our work cut out for us when casting.”

Looking at the call sheets, the cast of ‘Crescent Gang’ includes no household names, though after brief research, you will quickly discover many of the faces have already carved out a path towards their respective goals. By design, the producers wanted to build this film franchise around character driven stories.  This would require a leading talent that would be as loveable as she was talented. The search for the perfect actress to play the main character ‘Liberty’ ended when the producer reviewed some auditions from a previous project in development, Sacrificium. Eight (8) year old,  Mariah Tavares, joined the cast only two weeks prior to filming. Perhaps the producers’ confidence was boosted by her 26+ IMDB acting credits on narrative projects and the numerous other undocumented commercial credits.

“We’d seen  more than a few auditions and we even completed several chemistry reads with other actresses that were being considered for the role of Liberty. I can’t say I felt confident until  I saw Mariah Tavares’ read. And that’s saying a lot because we auditioned her with only 14 days left in pre-production.” – Gino R. Payne 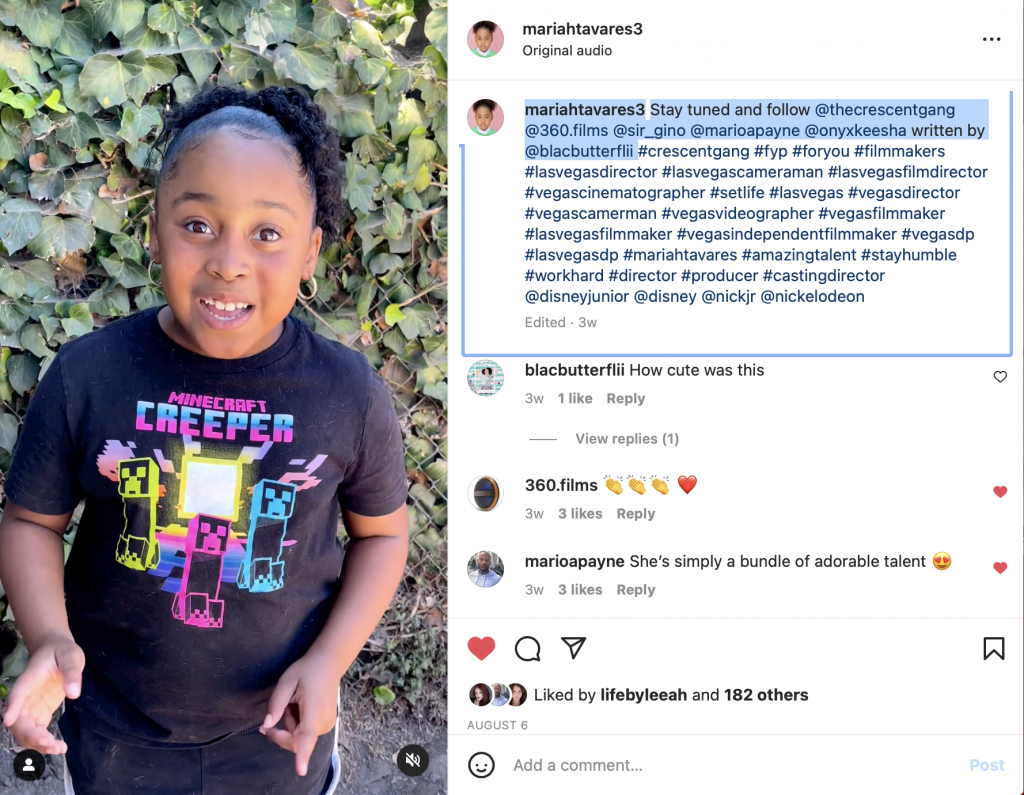 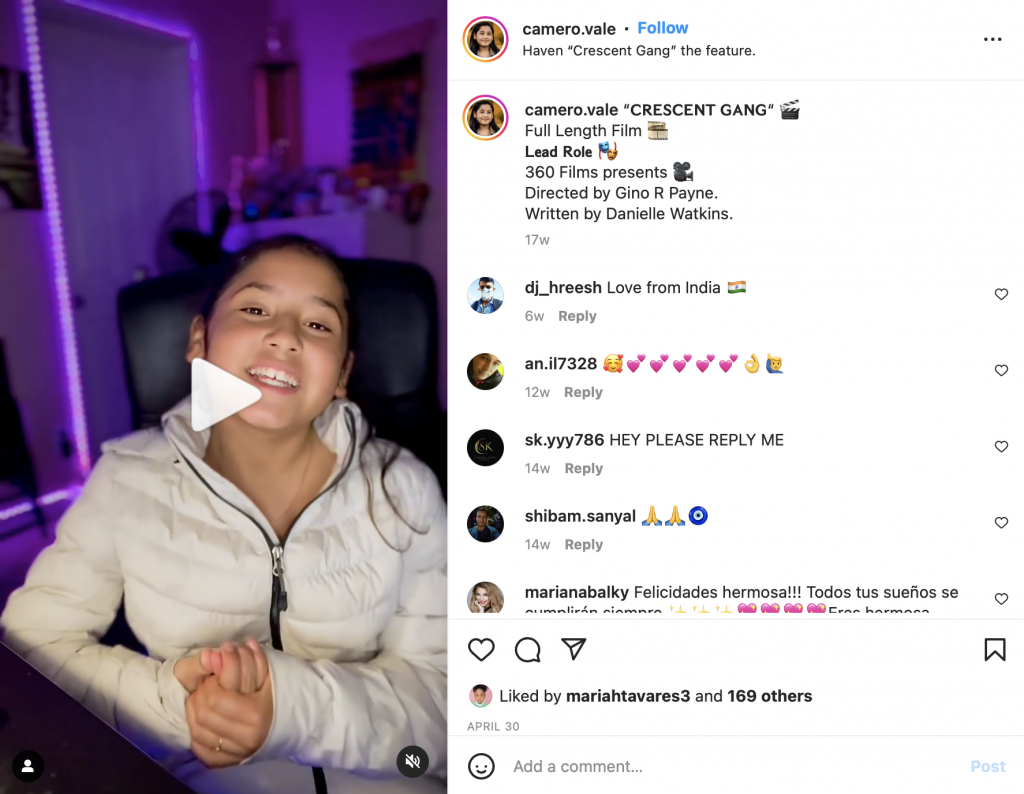 “I just want to say, I just finished reading the screenplay and I think it is amazing! Very emotional, one of the best screenplays I’ve ever read in my entire life. I just want to say thank you so much for this opportunity. It means so much to me. I just can’t wait to meet you guys and began playing my character. I’m so excited to bring life to a character that I know I’m going to love so much. Thank you so much again and I can’t wait to start filming!”– via @camero.vale

Actress and radio personality, Zenja Dunn, joined the team bringing a familiar face to fans of 360 Films and Onyx Keesha Films as this is her second film with the partnership in as many years.  She was earmarked for the role early in the process and proved to be a better fit than a number of very notable considerations. Zenja, who had been involved in the pre-production process, comes with a major advantage in that Zenja is already very familiar with the work flow and filming processes typically used by Onyx and Gino. Beyond her fun and charismatic energy that she brings to set and her effortless talent brought to the screen, having a radio personality like Zenja available to take on the workload of the media circuit will prove to be a huge advantage with the majority of the cast being minors.

In an announcement made during the wrap clap after Zenja’s final scene, Onyx noted “We knew you would be great for this role but what surprised us is how wonderfully perfect you worked alongside our young actors all the while, guiding and mentoring their talent.” 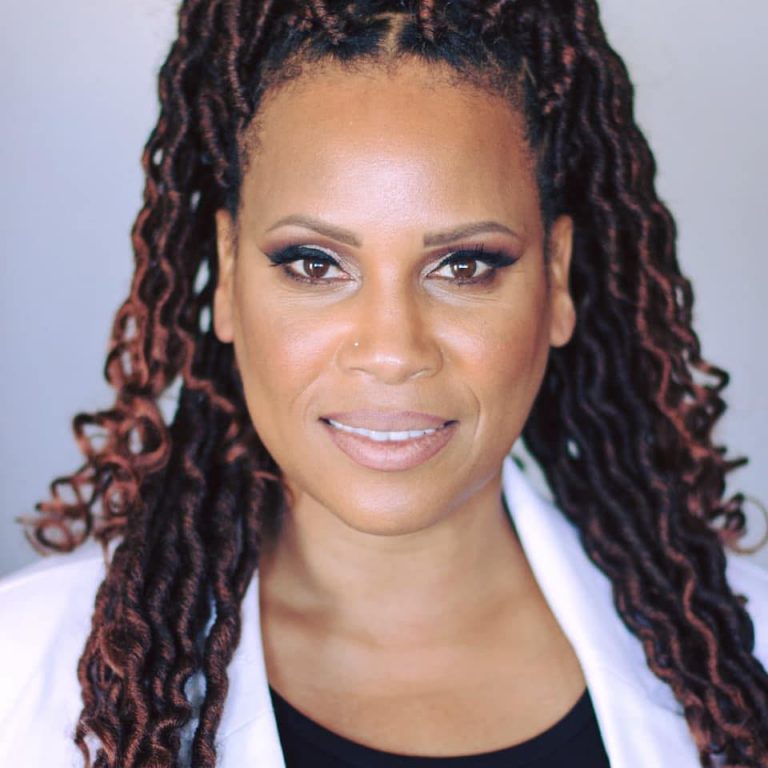 “First, Thanks to all of you. Everyone on this project has been amazing. Thanks for trusting me to play this fun and crazy role. To the young actors, I have been very very impressed with your talent. I never expected so much from such young actors. Your futures are very bright. Just keep going! Thanks you Onyx, Gino, Mario, Brad  and Rachi. You guys are amazing.”

The production team continued with the practice from a previous pre-production of allowing talent from various other types of entertainment backgrounds to have the opportunity to audition. A choice that led to Quinton Adams, a recording artist turned actor, to play the role of Mr. Pierce.

We’ve worked with Quinton in several facets over the years. Our directors and studio have partnered on music videos and other productions so we were well aware of the passion he brings to every project that he is a part of.   – Lisa Hearting 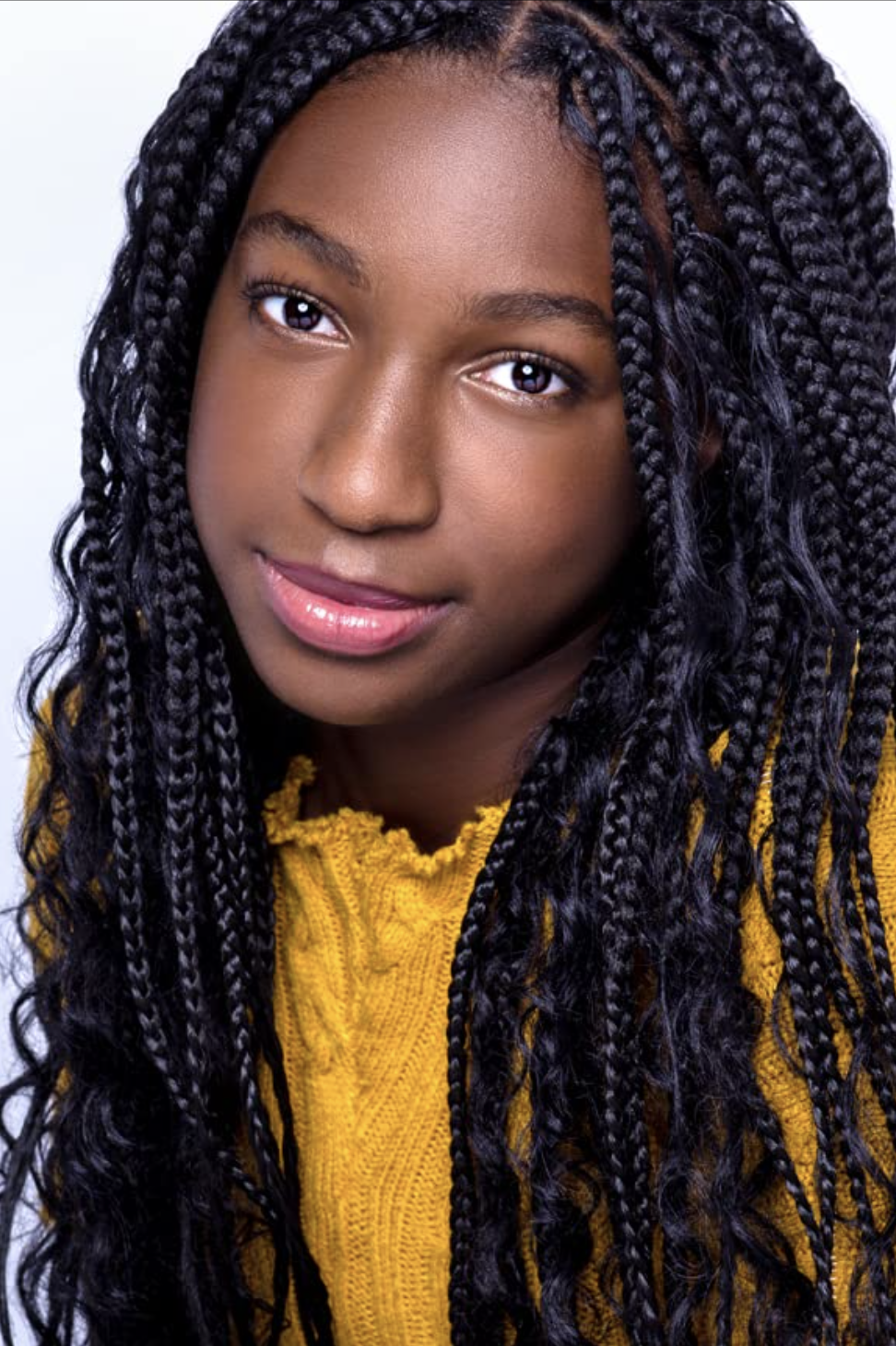 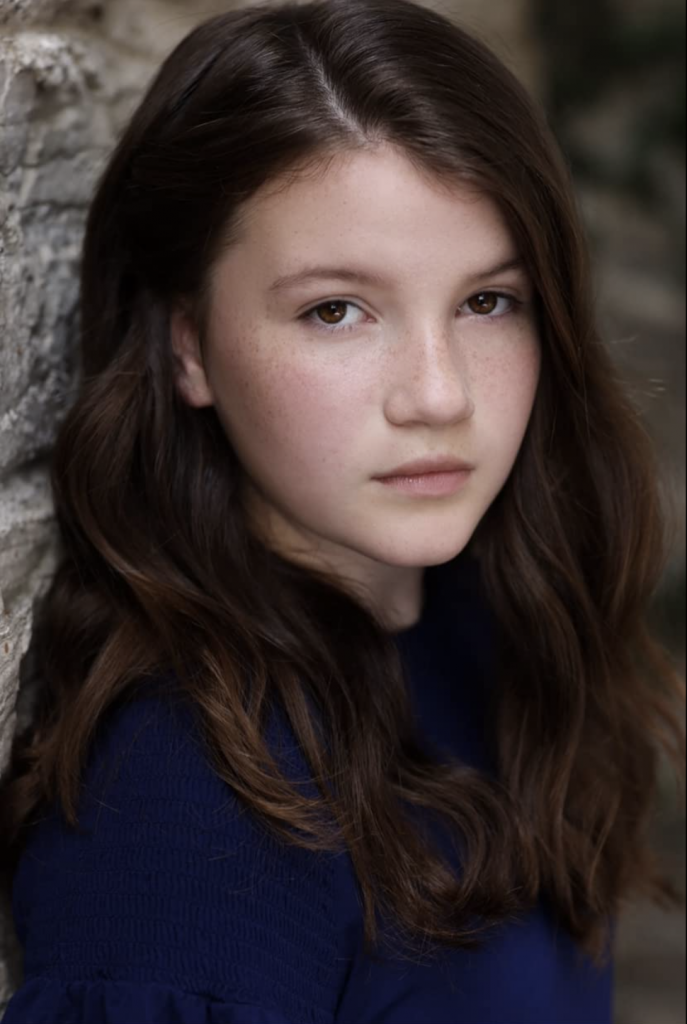 Amongst other notable actors were award winning actress Mia Brathwaite and seasoned stage performer, Olivia Kaiser. Mia was cast in the role of Lailah, the logical, cautious ring leader and oldest member of the Crescent Gang.  Mia has appeared in multiple films with 360 Films and Onyx Keesha Films. The 14 year old actress has a very impressive television commercial resume including a very recent Nike campaign where she is featured next to Naomi Osaka.  She was nominated and eventually named the winner at the 42nd Young Artist Academy Awards.

Olivia Kaiser is cast in the role of Carleigh, the pessimistic but funny older sister of Kyle, played by Remy Payne. Olivia’s previous work includes a laundry list of theatrical productions. She is a regular with the Desoto Family Theatre having performed in over 22 plays and more than 110 shows all together.  “Carliegh is a character that is very important to the gang. We knew we needed an actress who wouldn’t be afraid to be the proverbial bad guy.  But this character is also one that the audience needs to sympathize with. We feel she certainly encompassed the role.  She did that and a lot more” Gino Payne via interview.

You might have seen in my previous post the new poster for Crescent Gang!! Wow! This is just… AMAZINGGGGGGGG!!! I am so glad I have had this opportunity and I am so thankful and grateful to have the best experience, cast, and crew! Everyone was very welcoming and very funny!! Can’t wait for you guys to see it!! It will definitely be awesome! – @Olivia_k_kaiser Instagram 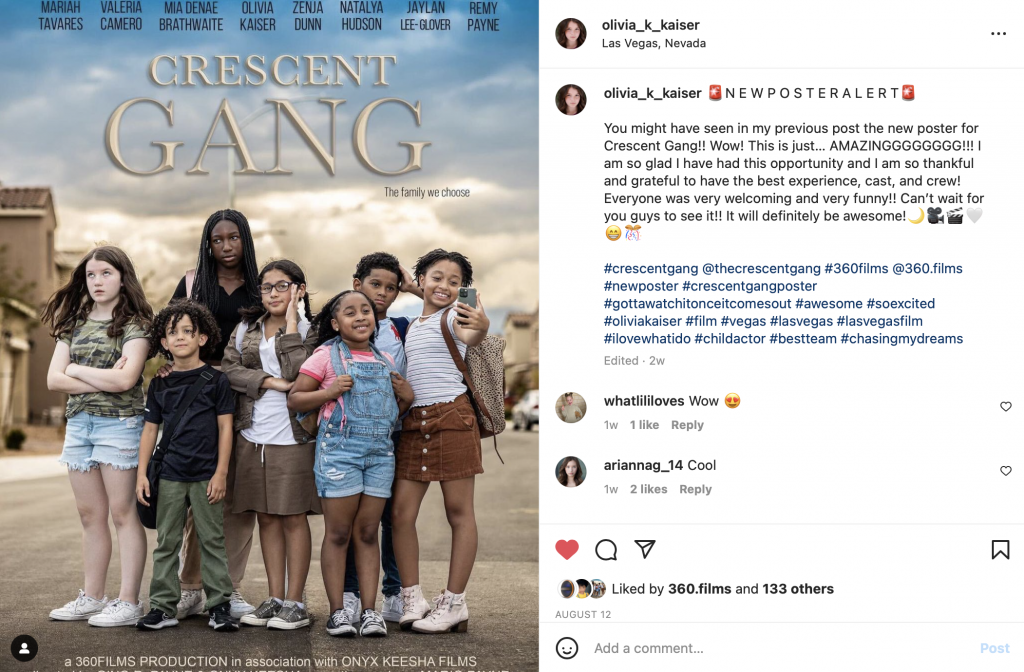 Rounding out the remaining talent appearing in Crescent Gang is a group of talented relative newcomers. Valeria Camero plays the role of the witty Haven. Though this is her acting debut for a feature film, she comes from a family of artists and creators. Her talent alone landed her the top role over other candidates with more experience. In a production meeting made public via Facebook, producer Mario Payne said “a new actress can give you a lot of confidence based on their preparation. I didn’t really know a lot about Valeria because I wasn’t a part of her casting process, but once I met her I was pleasantly surprised.  I’m very excited about her ability to deliver as Haven.“

Natalya O. Hudson, just off her role in Roku’s “The Higher Spirit,” returns to the big screen for the role of Daisy. Daisy is the social media enthusiast whose online engagement creates a first of its kind, artistic POV (point of view) screenplay for this film. While a selfie POV isn’t completely new to feature films and is even more common in popular television shows like Nickelodeon’s iCarly amongst others, this is the first time that the POV content is matched with real world accounts on both Instagram and TikTok. Natalya’s performance impressed Director Gino Payne who noted how naturally she performed  her many POV angles which were each uniquely difficult. “These angles were not shot on a cell phone. I didn’t want to drop quality nor go for what was easier. So in Daisy’s selfie angle, she’s actually performing her lines and actions in sync with the camera operators.“

Jaylen Glover-Lee and Remy Payne play the male support roles within the Crescent Gang. Jaylan, performing in his first feature film project, was a sure-win for the role of Michael from the very start.  Remy M. Payne plays the role of Kyle, the younger brother of Carleigh. While little has been released about the role Michael plays in the arch of the story, this 6 year old actor makes his second appearance on the big screen. Remy’s debut was as an infant in the epic fantasy short film “Half Untold.”

A Los Angeles based actress, Kira Marie plays the role of Karina H. The production company seems to have been intentionally vague about exactly what role Karina H. plays in the story but what is clear is that the role is significant enough to include her backstory. This is confirmed by the casting of Kira’s daughter, Kaori as younger Karina H. Yes, that’s right! Kira plays ‘Karina H’. and Kaori plays ‘Young Karina H’.  Initially, the production confirmed Olympic gold medalist and WNBA All-Star Dearica Hamby and her daughter Amaya for the role. But when her team qualified for the prestigious Commissioners Cup, the production decided to continue forward with Kira.

Post-production is expected to continue throughout the 2022 for a release in early 2023.

An unnamed source advised that the cast & crew could be privately screening a first-cut of the film as early as October 2022.