On Monday June 7th, 360 Films‘ confirmed via social media what had been rumoured for much of spring; the studio is in pre-production on the feature thriller film ‘Sacrificium‘. This announcement comes almost exactly on the one (1) year anniversary of the company winning its three (3) International Independent Film Awards for ‘Son of Sheba‘ bringing the total winnings for the production to 4 wins, 7 nomination and 13 invitations. The announcement gives fans of the film even more news to be excited for as the core production partnership remains in tact for this feature film.“@sir_gino and I are heading back to my hometown of Marietta, Ohio, in search of a location for our upcoming feature film.  When growing up, I always wanted to embark on my journey away from home. This film will be the second project that brings me back. It’s not always necessary to go far and wide. I mean, you can find exciting and inspiring things within your hometown. -Devin Teer: via @devin_teer

The suspense/thriller is described as an origin story of “Bloody Mary” set in an alternate universe where six (6) children struggling to survive an orphanage’s twisted plan that could mean certain death for them all.  360 Films’ Studio Exec. Mario Payne said in an interview, “I knew when I read this script that Devin and the team at Monkey Teer Entertainment were the perfect partners for this project. I just had to wait for him to have time to read it.  When he read it, he agreed we had to make this film.”

On first glance, the cast of ‘Sacrificium’ appear to be a considerably solid group of young and eager talent but upon closer inspection, you will quickly discover many of the faces are rather established in their respective fields. By design, the producers wanted to build this film franchise around talent with relatively new faces to allow the story and universe to grow more organically. It took some time to secure the talent they were looking for but eventually they found their leading lady in UK based actress, Lucy Allix. According to producers, she beat out a field of actresses that included a leading lady from a 2021 Oscar qualified film and another top ranked actress.

“We saw so many actresses for “Emily” that I started to question if it was realistic to get the performance we were looking for from a young unknown actress. We saw a few actresses we liked but everyone we loved was either too old or known for something else or simply couldn’t handle the range of the character arch for the role of “Emily.” Some were perfect for some aspect of “Emily” but not perfect for other aspects of her. When we saw Lucy, we couldn’t believe our eyes. Right away she was “Emily.” She could instantly and effortlessly reach out and move all the pieces that is to become the vehicle for this emotional story.  We must have done 2 or 3 additional levels of auditioning just because we thought she was too good to be true.” – Gino R. Payne 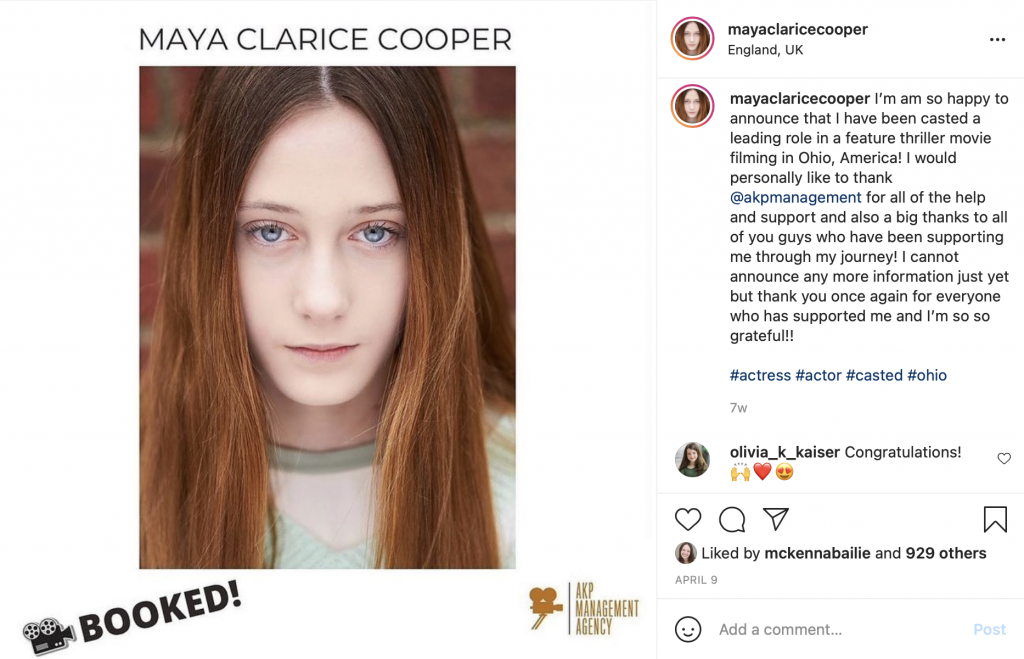 “I am so happy to announce that I have been casted a leading role in a
feature thriller movie filming in Ohio, America! I would personally like to thank @akpmanagement for all of the help and support and also a big thanks to all of you guys who have been supporting me through my journey! I cannot announce any more information just yet but thank you once again for everyone who has supported me and I’m so so grateful!!”– via @mayaclaricecoope

Contrasting the Lucy Allix casting experience was the casting of acting phenom Eliana Ghen. Prior to producer Devin Teer inviting Eliana to audition for the film, all conversations were focused on having the “Thatcher” role be the sole character that features a well established actress. After all, it takes a good actress to make a film but a well known actress can make it easy to sell. This all changed when the MonkeY Teer producer suggested Eliana for the role. With no prior knowledge of TikTok’s rising stars, 360 Films hadn’t given much thought to finding talent on non traditional platforms. The sentiment was likely compounded by the rumour that an unnamed popular actress was very close to accepting the role. That is until the auditions from Eliana came in. She wowed the directors and producers right away and changed the entire fabric of pre-production. Looking at her acting resume in retrospect, it probably should have been obvious. Gino Payne said last week “Sometimes it’s fun to be wrong and with the castings from TikTok, I was very pleasantly surprised. It’s fun when you get a life lesson and a huge victory at the same time; and this time, the lesson was a reminder to never write off a possibility that you haven’t already explored,” 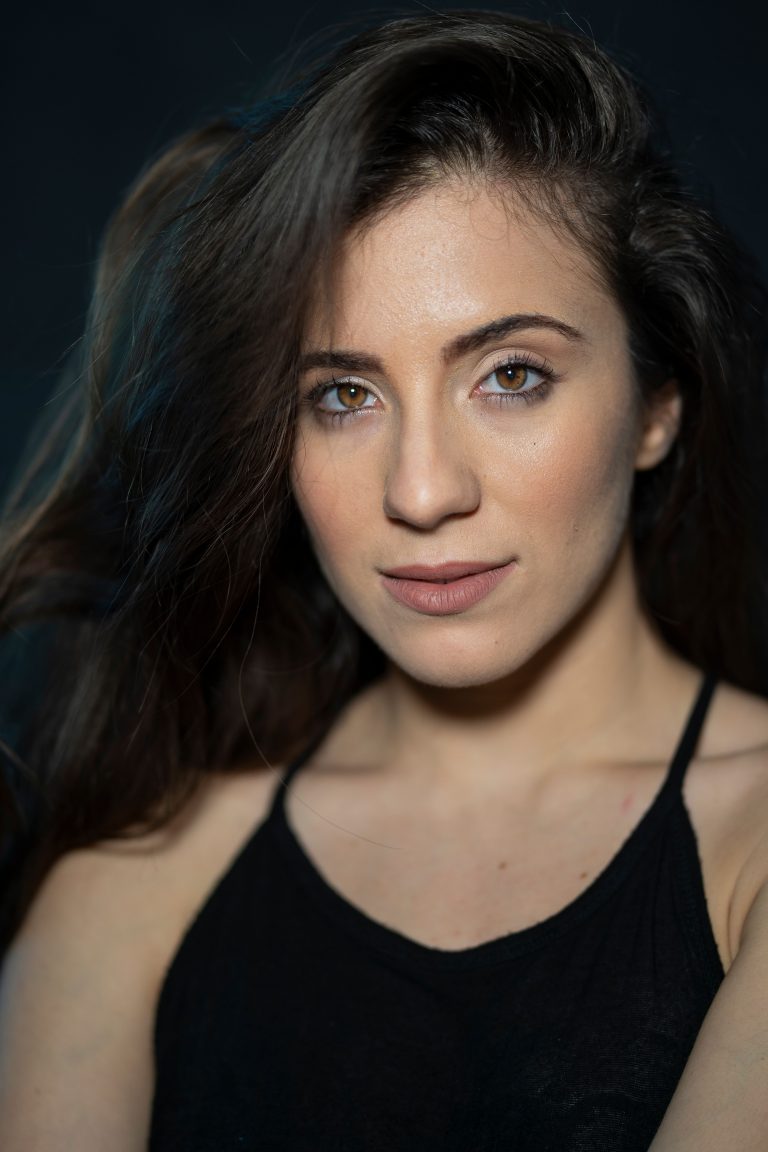 “I learned about the project Sacrificium when one of the producers, Devin, reached out to me. I really love when I have the opportunity to dive in deeper to the mind of psychopaths and sociopaths, so Thatcher was definetly a role that peaked my interest. I also really loved how the whole story takes place in a completely different time. Period pieces have always intrigued me.” […] “I am very excited to see how Thatcher turns into a created person on screen, with all of the other characters in the script, to serve the ultimate story.”

The production team learned what SAG had discovered months prior when they announced SAG eligibility for TikTok influencers.  TikTok has quickly become a medium for  many talented actors to create a platform to showcase and/or make a living using their acting skill set. With Eliana’s brilliant audition never too far from the minds of the producers, the joint production team continued down the influencer path long enough to find Maya Clarice Cooper (Winnie) and McKenna Baile (Francis).

We kept both traditional and nontraditional casting avenues open simultaneously. This forced us to view the talent we were getting from the agencies alongside the talent we found online.  What’s really cool is that we didn’t find influencers who can act. We found actors who can influence. We consider ourselves lucky to be the team that brings their talent to a traditional film medium.   – Lisa Hearting 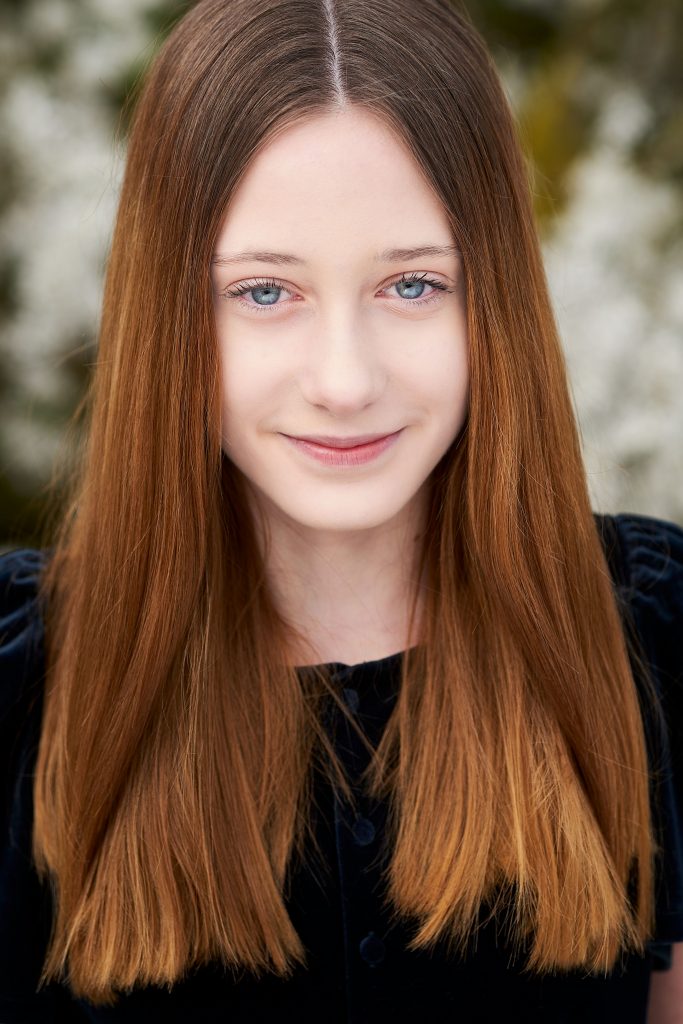 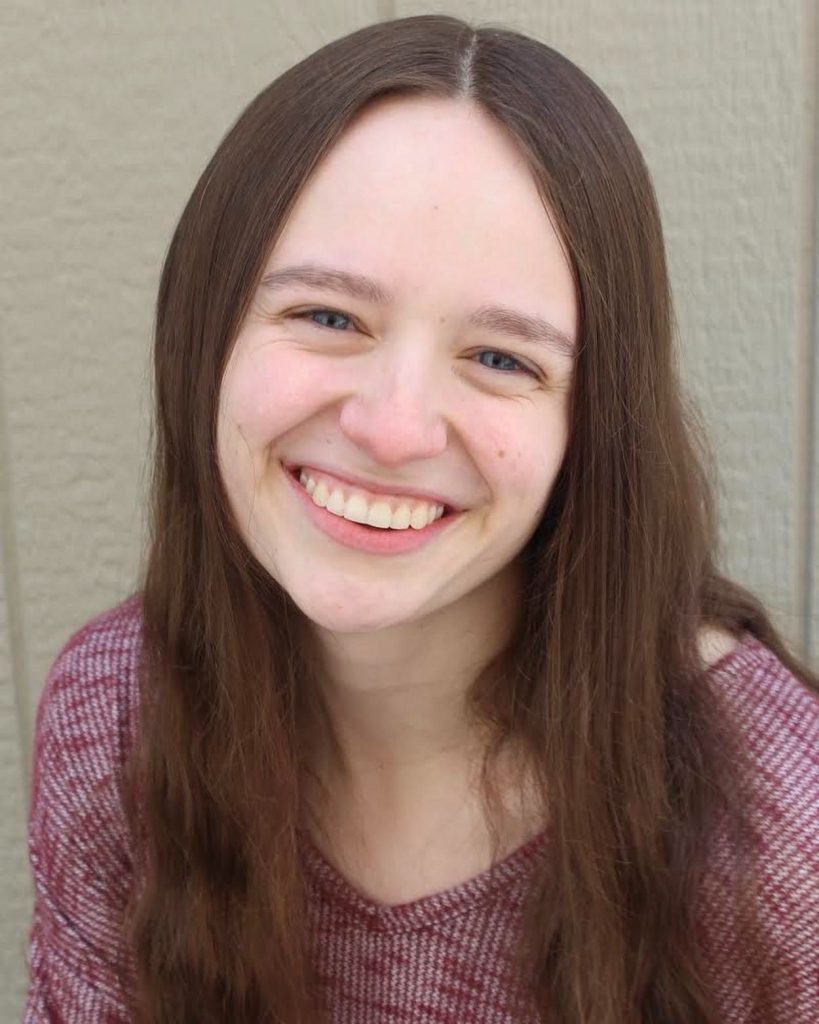 Amongst those actors to emerge from the traditional casting avenues is the classically trained, 11 year old theatre actress Olivia Kaiser out of Marion, Arkansas . While Sacrificuim is set to be a break out opportunity, Olivia has already built quite the resume considering her age. With leading roles such as ‘Matilda‘ in Matilda and several other highly coveted characters on her resume, there is little doubt that she is taking another step on her journey as a young actress with a bright future. For those that have followed Olivia’s acting journey thus far, you will be excited to hear that she is poised to display just how far her acting range reaches.

Looking at this collective cast so far brings up one apparent question, “Where are the guys?”  This is where the flow of answers end as this information has been almost completely withheld. Of the 4 main male characters that appear in the script, only Alfie Gosnay as “Thomas” has been publicly announced. Alfie, a talent out of the UK, matches the reoccurring theme of young, highly experienced yet respectively unknown talents in the American theatrical space. In this role as “Thomas,”  Alfie will certainly be in a position to change that narrative as he plays a tough guy ruffian who finds himself forced to work with others as they try to survive a dreadful orphanage. 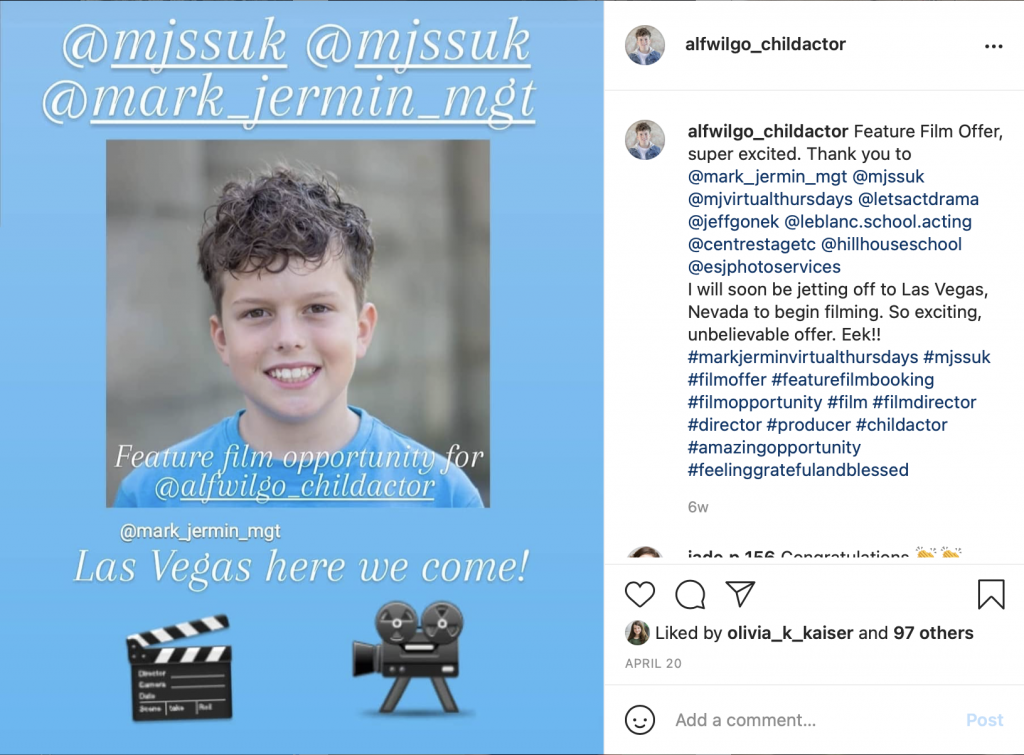 Filming is set to take place in Marrietta, Ohio; an update from the initial location of Las Vegas, NV. Having already filmed in Marrietta two years prior, the production companies have pre-existing filming infrastructures in place in the small town.  Exact dates for principal photography are not made public though it seems clear filming will take place in the fall of 2021. The film is directed by Gino R. Payne and Devin Teer with Sydney Lawson serving as director of photography. Other notable partnerships on this production include award winning Special Effect Artist Beki Ingram as well as Art Designer Vicki Ayers and Thom Mehan.